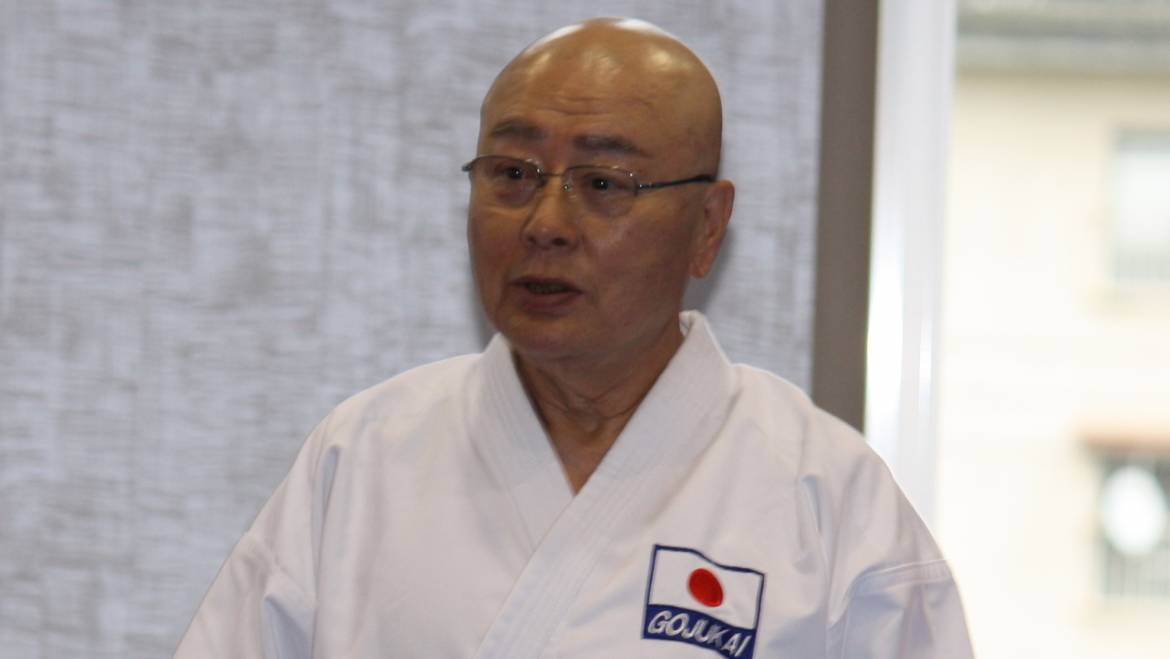 Goju Ryu Karate can be mentioned as drawing a big circle with a thick brush dripping black ink. It’s not like a square drawn in a thin line of a fountain pen.

Let me explain some typical techniques of Goju Ryu.

1. The movement of En, circular motion

One of the characteristics of Goju Ryu Karate is that both Kumite and Kata consist of various techniques based on close fighting.
Generally, power is calculated as follows: Power, quantity of motion = Mass X Speed. You need a right amount of distance to maintain speed.

In a close fighting, we develop skills to strike and hit opponents in a distance of Issun, an inch. Propulsive force to keep going, inertial force which is gained by sudden stop, centrifugal force by circular movement of hips, and descent force maintained by lowering the body with loosened knees, in addition to that force made by stretching muscle can make it possible to strike and hit in a distance of Issun. However, it is not enough. On top of that, breathing force is needed. Goju Ryu regards breathing as one of the most important factors.

Usually, people breath with their chests. However, in Goju Ryu, we breathe from the abdomen. This breathing technique is lowering the diaphragm and opening the chest cavity. Normally, people swell their stomachs when they breathe from the abdomen, which indicates your breathing to your opponents. Therefore, you have to tighten your stomach when you breathe. This application gives more pressure than breathing normally. It provides internal organ massage effects. Also, it is a good training.

The imagine of this breathing is inhaling all the “Ki” that exists in the universe from “Jo-tanden”, upper tanden between eyes. You actually inhale through your nose, and then you lower all the “Ki” down to “Chu-tanden”, middle tanden, just above the stomach. Next, you lower it to “Ge-tanden”, the solar plexus under bellow and compress it to explode.

This image is just like a car engine, inhale –> compress –> explode –> discharge. The big gear of the engine in “Ge-tanden” provides its rapid power to other gears of joints. Then you punch and kick lowering your hip level by the help of countervailing power.

You do this by breathing techniques, which makes it possible to attack in a distance of “Issun”.
Practicing Sanchin and Tensho regularly is necessary to master it. Therefore, it is said that Goju starts with Sanchin and ends with Sanchin. Remember that Sanchin, Goju’s close-handed kata, especially conforms “Body”, “Breathing”, and “Heart” to one and cultivates mental strength and strong force.