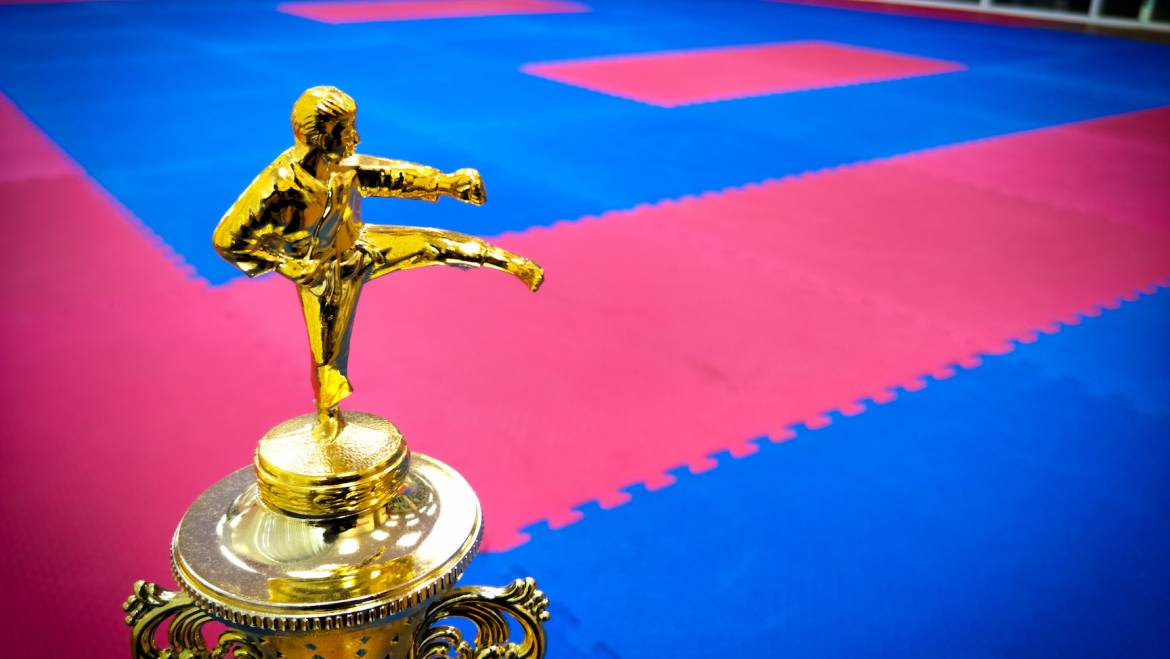 Karate; it’s a sport isn’t it?

It’s a fair question, after all karate definitely provides exercise; training increases our heart rate and makes us sweat, builds muscle and pushes our flexibility and endurance. It also demands increasing amounts of skill which is honed over time. Surely all this defines karate as a sport?

Let’s have a look at some definitions of the noun ‘sport’:

All definitions agree that a sport contains an element of competition, with the GAISF placing this last element at the top of its list of definitions.

The Oxford English Dictionary defines sport more specifically as competition for entertainment. The entertainment element is also backed up through this interesting article by Leigh Steinberg for Forbes magazine entitled ‘What Defines a Sport’ https://www.forbes.com/sites/leighsteinberg/2018/07/28/what-defines-a-sport/

So, looking at karate, yes it requires both physical effort and skill but does it contain the element of competition for entertainment?

It can, but then it becomes something different; sport karate.

Sport karate can be defined by the fact that the ultimate goal is to enter and win competitions in the public arena, and in this is it massively different from traditional karate. Most students who have seen or trained in both types of karate will understand that they are different in a number of ways.

Sport kumite has a specific set of rules that must be followed, it is dynamic in its movements, restricted in its techniques and levels of contact, and most importantly there is a clear scoring system to allow competitors to be judged against each other and ultimately decide who is ‘best’.

Sport kata allows the student to practice a wide variety of kata beyond their grade. Emphasis is on esthetics over practicality or understanding, some techniques are altered or exaggerated, and timings are formalized to add drama to the performance. In depth understanding of bunkai is not required, and if bunkai is included the emphasis is again on showcasing athletic ability over practicality.

In acknowledging these differences it occurred to me that an element of sport karate can quietly crossover to the dojo and traditional karate where it does not belong.

The Oxford English Dictionary defines ‘competition as – ‘The activity or condition of striving to gain or win something by defeating or establishing superiority over others’.

‘Defeating others’: This idea has no place in the traditional karate dojo. When you train with others, you strive to improve both them and yourself, when you spar others, you are not trying to keep score or ‘win’, you are using their movements as a learning tool to increasingly understand your own actions and limitations. When you train in kata you focus not on making it look prettier than others, but increasing your own understanding of the techniques and how your body moves effectively.

‘Superiority over others’: Could we be talking about the hierarchy; the grading system? A particular belt colour does not denote you as ‘superior’ or ‘inferior’ to others, it simply demonstrates you have attained an understanding and skill level deemed appropriate for that stage of training, it does not make you Superman or Wonder Woman, it simply marks a point in your transition from one level of understanding to another.

You should always strive to emulate the behaviors of the grade above you, but not to compete with them. Learn what they have learned, and if you occasionally accomplish something they cannot, don’t congratulate yourself too much as this can lead to over confidence, or a feeling of superiority, which reduces your ability to learn.

In turn you should always be respectful and open to lower grades, and understand they are moving towards the accomplishment of what you have just learned. Do not be threatened by this and compete with them because that will make you look back, not forward, which is guaranteed to slow your learning.

We may recognize some of these examples of what competition in the dojo looks like.

An Instructor who is in competition with his/her students may spar them a little too roughly, may belittle struggles or difficulties. They may restrict contact with other clubs or avoid official grading routes for themselves through fear of failure.

An instructor who is in competition with other clubs may grade their own students too quickly, or publicly criticize other instructors and their students.

Students who are in competition with their instructor may resist instruction beyond their own understanding, they may argue in class, they may share derogatory opinions about teaching ability with other students, and they question their instructor’s assessment of grading eligibility for themselves and fellow students.

Students who are in competition with fellow students may spar peers or lower grades roughly and cause upset or injuries, may express derogatory opinions about fellow students, may react negatively when someone grades before them.

During my 19 years of training I have seen all of these competitive behaviors; some I have seen in myself, especially during my early training years.

Ask yourself who you are competing with in your karate class. Competition is part of our culture and has many uses in the right setting. But in the dojo, in a traditional setting, we should be mindful of moments when competition creeps in, and make it part of our training to change ‘The activity or condition of striving to gain or win something by defeating or establishing superiority over others’, to ‘the activity of striving to learn from and with others’.

At the beginning of each class we ask our fellow students to ‘please teach me’, not ‘please let me win’.

Traditional karate cultivates mindfulness, emotional growth and social consciousness; elements it has in common with Yoga, meditation, philosophy and volunteering in the community. Can you imagine a tournament for competitive mindfulness? Exactly, it has no place there. Enjoy competing in the ring, but keep it out of the dojo.

SRK is going pink for October