Fake it ‘Til You Make It

HomeArticlesFake it ‘Til You Make It
20/12/2013 by caroline in Articles, Articles by SRK Instructors 0 Comments

(or, Making Your Mistakes With Confidence)

When I was 8 or 9, I was getting ready to perform at a piano concert. My piano teacher watched me as I nervously struggled through my piece, making mistake after mistake. And every time I hit a wrong note I would pause momentarily and turn to him displaying a look of horror or apology on my face. Finally, he couldn’t bear watching me suffer any more; ‘move over’ he said. And we swapped chairs.

He played me a beautiful piece of music; he played it loudly, confidently, with expression and passion, swaying as he played. And every now and then he would drop in the most horrendous discord – a huge glaringly obvious mistake that made me cringe.

But, he didn’t change the way he played at all; he carried on as if nothing had happened, in fact if anything he played even more confidently, and by the end I wasn’t reacting at all to the dud notes.

When he finished he turned to me and said; ‘when you make a mistake, always make it with confidence’.

This January I started back at regular karate training after taking about 5 years out to have our two children. I had graded to black belt about 18 months prior to falling pregnant, and had taught the Wickford class until I was 8 months pregnant.

When I returned I had forgotten a lot, I was generally unfit and my body was not the same one I had before. We had made the change from being a split style to solely Goju, and the white and yellow belts were doing katas I had never seen. High grade sparring was suddenly up close and personal with a lot of takedowns and groundwork. And there were past students of mine that were now Shodan, Nidan, and just so damn tall (you know who you are)!

Intimidated? Yes I was. Did I show it? Not in public. Why?

That means that although sparring younger, stronger guys who hit hard frightens the life out of you, you will do it anyway. Although standing up and performing a basic kata that you really don’t know threatens to make you feel so humiliated you just want to curl up in a corner – you do it anyway. Because wearing a black belt while struggling to learn a different set of basics that the yellow belts do very well makes you cringe inside – you do it anyway.

Because when you do it anyway, you get better.

Fake it ‘till you make it is not about arrogance, or pretending you know something when you clearly don’t. It’s about a ‘can do’ attitude, a commitment to your own improvement, a quiet confidence that you can take on anything and you will be able to cope and thrive, and an acceptance that you will make a lot of mistakes along the way.

So, is this relevant to you? What do you think?

Do you make sure you are partnered with your friend for kumite because the 6-foot bloke in the blue belt scares the socks off you?

Do you avoid competing in tournaments because performing in front of a crown terrifies you?

Do you constantly chatter during partner work because you are nervous of getting the exercise wrong? Do you profusely apologise every time you do?

Do you shy away from special classes with guest instructors because the subject matter is new, and you may have to train with strangers?

Do you argue with your instructor when he says you’re ready for grading?

Do you pause momentarily and turn to your instructor displaying a look of horror or apology when you make a mistake in kata?

Welcome to the club, you’re in good company. In a couple of weeks a fresh, shiny new year will begin, a lot of folks will set themselves new year’s resolutions, and us karate lot will be setting ourselves some new goals. Maybe ‘Fake it ‘Till you Make It’ should be yours?

Iain Abernethy shared a wonderful comment on Facebook recently, which I will be taking as my resolution for 2014 – ‘Commit To Awesomeness’. You can have that one too if you like. 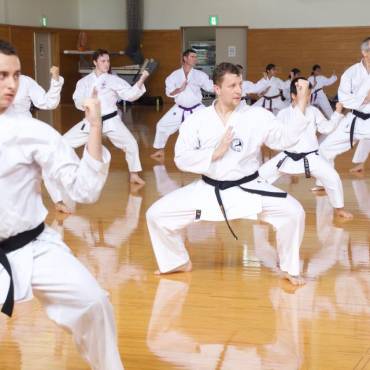