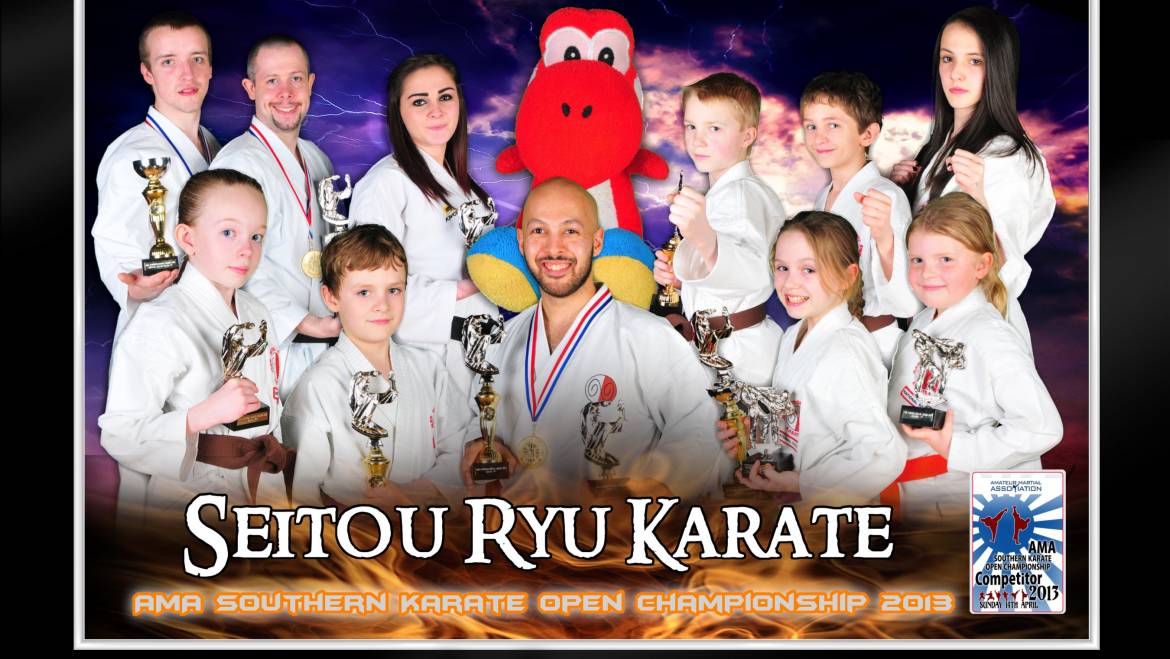 Team SRK are joined by club mascot Yoshi for a photo with all of their trophies won on the day.

Emma Ludkins, 10, brother Tommy, 9 from South Ockendon and Adam Baglin, 10 from Chelmsford, beat over 20 other competitors in the 4th Kyu and below junior division for kata to secure first, second and third placings. In addition to this, Emma also secured an additional 2nd place in the girls kumite division.

“They have all worked incredibly hard and its great to see it pay off at events such as these. The team spirit in the squad is fantastic, and special mention must be made of our youngest and newest member Megan Homer, who at just 8 years old won her first trophy for kumite today. She only started competing last month and this was only her second time in a tournament so this was quite an achievement for her. Her parents who were watching the entire day have been very encouraging and supportive and I’m sure they are extremely proud of her success too.”

The rest of the 12 strong squad kept up the good work and brought home 15 trophies in total. Richard Hang Hong won Bronze in the Men’s Black Belt Kata, following straight into the Mixed Open Black Belt Kata event and narrowly missed out on Gold but secured a Silver trophy. Fellow Wickford students Zoe Nolan (11yrs) and Connor Frost (12yrs) both whom had just graded to brown belt in March, won Bronze and Silver in their respective kata and kumite divisions. Chelmsford’s Martin Lawrence, 2nd Dan won Bronze in the men’s -75kg kumite, as well as winning Gold in Team Kata with Samuel Parker (Tilbury) and Sensei Richard. 16 year old black belt Jade Green from South Ockendon also had success with a Bronze win for Kata.